In the weeks and months following the Hendricks family murders, there was interest, curiosity—maybe even controversy—about why a space on the large family tombstone reserved for an epitaph had never been filled in.  Some family members explained that given the circumstances, whatever words appeared—even a phrase from the Bible—would be open to misinterpretation and speculation. 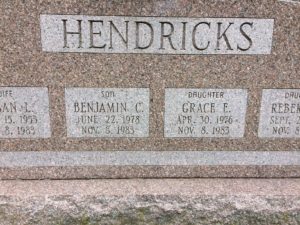 David Hendricks had been behind bars about three years when he shared with family and friends a poem he wrote that suggested the space will remain vacant forever.
THE EPITAPH
Leave a blank space
for a later epitaph
as you etch the face
of her marble memorial.
I thought to choose a Bible verse
to show she had no equal—
“Of whom the world was not worthy,”
or to tell where she is now—
“With Christ, which is far better.”
But wild surmise
of impossible motive
and unreasonable faith
would twist such pious tribute
into demented logic.
Everything is twisted
by those who know me not
and never will her.
So form it blank for now,
until I can compose
worthy words.
But I can think of nothing they won’t pervert.
Nothing can express her excellence.
Nothing—empty perfection!
Unwritten line, stand and shout,
clearer than platitude,
inspired or invented,
that they will never know,
that I can never tell:
her Quiet Greatness,
the senseless waste,
the blankness of her absence.
Mute eloquence!
“More than tongue can tell.”
Let it stand
in stone
Forever.
David Hendricks
1-6-87 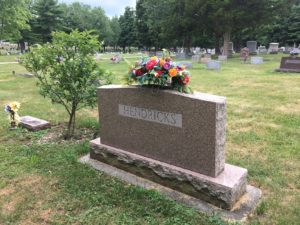 He expressed frustration over his situation in a letter he sent me from prison in February of 1989–two months after he’d gotten married in a prison ceremony to a woman who had two young children.   I had written Hendricks, seeking permission to use the poem in Reasonable Doubt (I ultimately didn’t).  He, however, gave me a green light in the letter, ending it by saying, “You told me you wanted to publish ‘Epitaph’ to show my feelings about the way people twist and distort the truth.  If you want to represent my true feelings of frustration right now, sitting in prison month and (sic) month when I have two darling children growing up without me and a wife who needs me and I am not only innocent but I now think I know who murdered my family and no one wants to even hear about it until I can ‘prove’ it–if you want to represent how I feel right now, just get permission to reprint Edvard Munch’s painting, ‘The Scream.’  You can make it an eight-page fold-out!  Sincerely, David Hendricks.”
In case you’re unfamiliar with the painting, here’s a link: https://www.edvardmunch.org/the-scream.jsp
In November of that same year, shortly after Reasonable Doubt was first published, Hendricks wrote a letter to the Bloomington newspaper, The Pantagraph:
Hendricks:  This is reason
gravestone lacks epitaph
In Steve Vogel’s book, “Reasonable Doubt,” a photo shows my family’s gravestone.  It contains a blank line where an epitaph should be.
Rumors are circulating about that blank line.  Like most rumors, they are false.
I agree with the Christophers’ motto:  “It is better to light one candle than to curse the darkness.”  Therefore, instead of decrying the rumors, I offer the following information:
Shortly after the murders of Susie and our three children, I requested the line, “With Christ, which is far better.,” to be inscribed on their gravestone.
To us Christians, that Bible verse imparts great comfort.  Wise friends, however, advised me that people would misinterpret it.
I thought of an alternative, another Bible verse, this one expressing the value of those I had lost:  “Of whom the world was not worthy.”
That, too, could be misinterpreted.  So I asked for the gravestone to be left blank for some time.
Years have passed.  I can now safely inscribe either Bible verse.  One is still a comfort and the other still expresses the value of my loved ones.
But neither expresses what I feel.  For years I have searched for the perfect epitaph.  None has satisfied me.
Which is why I plan to leave that gravestone as it is.
That blank line bears testimony in mute eloquence both to the ineffable loveliness of the people buried under it and to the indescribable loss to those of us who remain.
DAVID HENDRICKS
Chester