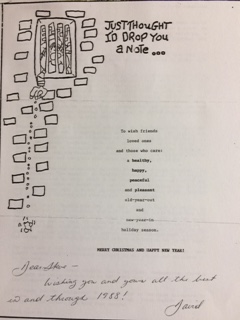 David Hendricks had been behind bars four years (three of them at Menard, a maximum security prison) in the deaths of his wife and three children when, in December 1987, he sent a year-end newsletter to family, friends and, I gather, media contacts:

The last three months have offered me more excitement than most months before then. A yard-melee that killed one and injured over a dozen, an over-two-month lockdown (not too exciting), a commissary skirmish, a major cellhouse-to-cellhouse move of over four hundred inmates, and more–lots more.

Added to that excitement is my growing tension while I wait for the long-overdue decision from the Illinois Supreme Court in my case. I’m still hopeful, but still waiting.

The September-28 fight in the yard was between a white gang and a black gang. It occurred at the end of the evening yard session, just as the inmates were about to be called in. One inmate pretended he was tripped by blacks who were lined up in a double column, and the fight was on. It lasted 20 minutes, mainly consisting of two charges with brief and violent engagements. Within two hours the entire prison was locked down; inmates were screaming vulgarities, obscenities and threats; burning fires on galleries and throwing boiling water on anyone who was unlucky enough to walk in front of their cells.

Because the fight was a result of gang rivalry, and because the black man who was killed was a high-ranking member of one of the gangs, the administration anticipated widespread violence on release of deadlock, so while the warden bargained with the gang chiefs we all waited on deadlock–locked in our cells full time. A week, a month, two months and more. It is now mid-December and this place is just getting back to normal movement for the first time since the September-28 melee.

They tried releasing us earlier, but when they did, violence erupted.  In the commissary, for example, on Tuesday, November 24, the first time we had been allowed to shop, while I was checking out at the end of the line, a fight broke out behind me. Cans of food flew through the air and swung inside the ends of socks, an aluminum garbage can, wooden benches and everything else not tied down became instant weapons.

Two days later, Thanksgiving Day, we were told we would be moved, enmasse, to the South Cellhouse the next day. The South House has the smallest cells, much smaller than those I’ve lived in since coming here, and with two men in them, it would be almost impossible to live. So I was locked-down, told I’d be moved to a worse cellhouse, no end to the deadlock was in sight–it was a rather downbeat Thanksgiving! Sure, I had things to be thankful for; I just wasn’t thinking of any at the time.

The move was a mess! I’m amazed I got my possessions and papers! Each inmate carried whatever-package-was-next up the stairs and delivered it to its owner.

Our new cells are indeed smaller, but I’ve found compensating factors that make the cellhouse seem not so bad. Not good either, but then, this isn’t supposed to be the Ritz.

I’m ready for the excitement to end and for my hum-drum existence to resume. Hum-drum is better than hair-raising. Which reminds me–I need to get to the barber; it’s been four months!

With love to all,
David

Hendricks’s account of when and how the fight began differs from The Chicago Tribune‘s account. But the basics are the same. Here’s a link to the Trib’s account: