The relatively modest size of Bloomington, Ill., narrows the definition of “coincidence.”  But wasn’t it quirky that just an hour after a recent book signing, when I joined my family for dinner at a local pizza joint, in walk Ron Dozier, who prosecuted David Hendricks in his first murder trial, and Charlie Crowe, the first person to question Hendricks after the bodies of Hendricks’s wife and children were found?  Both are now retired.  (People who’ve read “Reasonable Doubt” will love the pizza meal irony.  And, no, we were not eating at Chuck E. Cheese.)  We talked, and then paused for a photo.  That’s Crowe on the left, Dozier on the right, and some other guy in the middle. 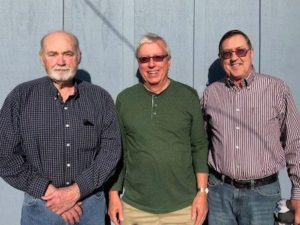